To Choose to Dream

What an awesome scene it was to look upon. The magnificent New York City Skyline was a monument to opportunity and adventure that reached for the sky. The glorious view before her reminded her of why she had made the journey in the first place. From her thirtieth-floor balcony of the Genesee Hotel, Mary could clearly hear her thoughts for the first time in a long time. The breeze seemed louder than the bustle, but she knew all too well that this serene scene of splendor was merely a mirage that lured all the naive hopeful stars into it’s dark alleys of chaos and despair.

Even as a young girl, Mary had always dreamt of stardom. She lived to see her name lit up on the marquee. She longed to be the picturesque example of talent and glamour that would be the envy and desire of all the world. Whether it would be considered brave or foolish, she didn’t care; She followed her dreams to the sleepless city and hoped fortune would meet her there. However, like a crystal vase stuffed with delicate aromatic blooms, sometimes dreams will fall and shatter into gloom.

She had imagined bright lights and champagne. She dreamt so hard that she could practically feel and hear the applause and adoration. Instead, she lived in destitution and desperation. She daily dreaded having to return to the cold, merciless grit of the waking world.

What an awesome sight it was to look upon. The serene scene that embodied her idealistic dreams seemed as unreachable as the heavens for which the skyscrapers grasped at. She pushed herself from the ledge. The breeze seemed louder than the bustle but, as the details of the dirty streets and horrified onlookers became more clear, she was at peace with her decision to simply go back to sleep. 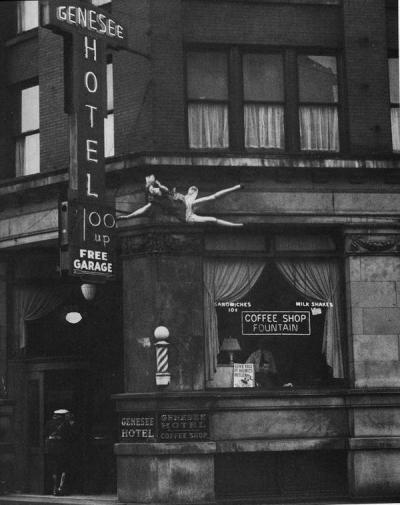